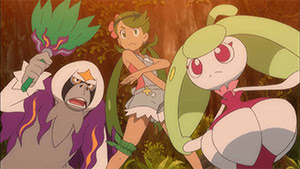 Pokemon Sun & Moon Episode 39. Something funny Mao in class during school. It is said that the coverage of a television program was to be included in the dining room run by her father!.

Not only television crews but also many customers came and were very busy when interviews began. At that time, Mao has run out of the house with force and force because of a little bit!